Blue Lotus - Drawings for the lives in the Land of Snow 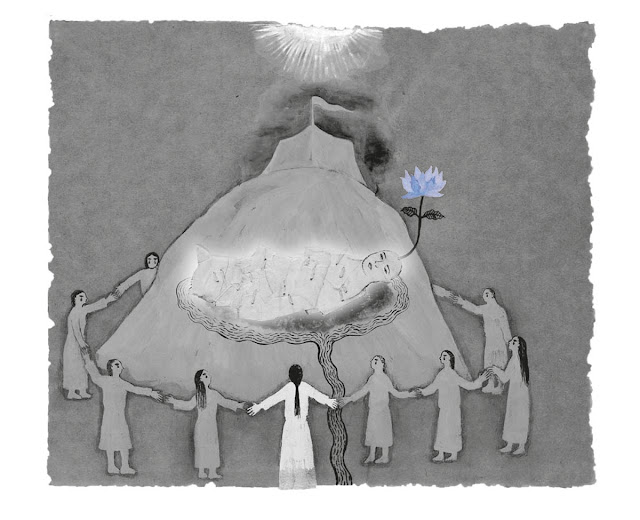 Visual Space is pleased to present ‘Blue Lotus - Drawings for the lives in the Land of Snow’, featuring drawings and a mixed media installation by Vancouver-based Japanese artist, Tomoyo Ihaya. These images have been created since January 2012, mostly in Dharamsala, Himarchal Pradesh, during one of Ihaya’s several artistic research trips in India sponsored by Canada Council for the Arts.

In early 2012, the growing number of self-immolations of people in China-dominated Tibet upset her profoundly. Soon she arranged to live in Dharamsala for several months, the Tibetan- in- exile community in India. There she vowed to make a drawing each time she heard a report about another act of self-immolation. For her, these were a way of bearing witness, paying tribute to, and mourning the dead through her art.  Ihaya describes her observations and sentiments in her blog (http://www.tomoyaihaya.blogspot.ca).

One of her many insightful observations connects her past experiences in India where she had documented fire pits and cremation altars and thought about the meaning of fire in different ethnical and religious communities. Self-immolation by the Tibetans who are Buddhists were an extreme way of “offering” their bodies to “fire”, asking for freedom and peace. Ihaya could not help but create large and small drawings in her emotional response to these events, conveying her sense of mourning.

Indian writer and scholar, Ananya Vajpeyi, described the drawings in this way:

“Each of her little canvases on Japanese paper tells a story, with the self-immolating individual as the protagonist of that story. Certain symbols and metaphors recur in all her works, including a white tent on a mountain, green saplings, blue lotuses, red flower petals or drops of blood, water bodies of all kinds, principally lakes and rivers, candles, trees, animals, brids and of course human figures, mostly in white” (Seminar magazine, April 2013).

BIOGRAPHY:
Tomoyo Ihaya's primary media are drawing, printmaking, sculpture and installation.
She pursued German Literature and Curatorial Studies at Rikkyo University and the Fine Arts Department at Mount Allison, Emily Carr and Capilano universities. In 2002 she obtained an MFA from the University of Alberta. She has received numerous awards including project grants from the Canada Council for the Arts, BC Arts Council and the Alberta Foundation for the Arts. She also received second place in the Great Canadian Printmaking Competition. Her curiosity about other cultures and her strong belief that art and one’s life should be intertwined has lead her to travel and produce art work through international artist-in-residency programs in many parts of the world.

For more information, please visit our website www.visualspace.ca or call 604-739-0429