In flame you walk - a drawing from ' Eyes Water Fire' 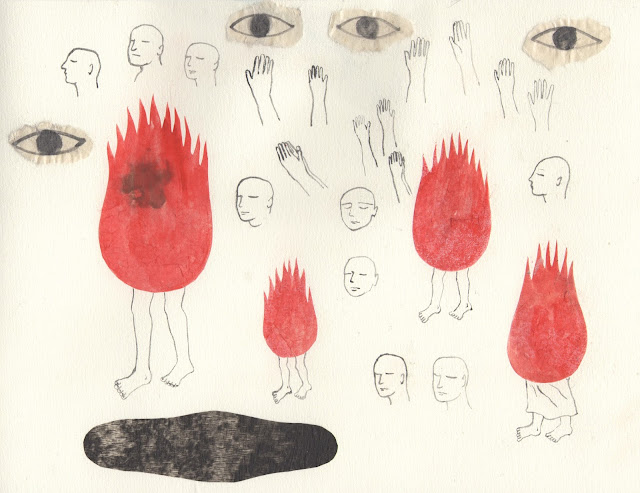 This is a drawing for one scene in the art video called "Eyes Water Fire".  A short video starts from a scene of the green pasture, mountains and a river.  Yaks and Sheep.  Nomad tents.  Then fences appear, water in the river and grass of the pasture turn into brown.  Out of the dead pasture,  a white figure of woman and people in flame appear.  They move in group, with praying faces and hand in the prayer form.  They walk towards a snowy mountain, that has a glacier lake in its belly.  They walk and disappear into the blue water.  They walk in flame. Water cool their bodies and their hearts.  The pure hearts.

The art video will be in public in the next year.
I post this with a sincere wish that the true peace prevails on the earth.

In thought of all these fellow humans who sacrificed their lives for human dignity, justice, and others' well-being.

At last,  I would like to express my deep gratitude for two young artists, Mona and Jose, who have helped me to make these drawings 'alive'. 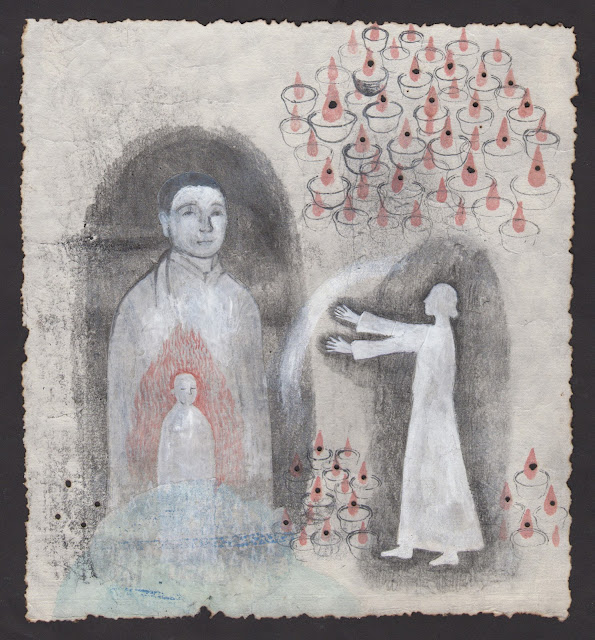 For Ani Palden Choetso, a nun from Ganden Jangchup Choeling Nunnery, who self immolated on November 3 2011 in Tawu county, Kardze, Kham, Tibet.

It is said that she may have set fire to herself in the same place that monk Tsewang Norbu from Nyitso monastery self immolated on August 15 in the same year.

She passed away soon after her protest.
Afterwards,  a group of nuns lead a protest and thousands of local Tibetans carried out a candle vigil early in the morning of her funeral on November 6th.

The video, which came out from there, shows her standing on the street engulfed in flame.
A woman in chuba ( Tibetan traditional dress) walks up to Palden Choetso's burning body and throws a kathak(Tibetan white scarf for offering and blessing).

On the dark street and against the fierce flame, the white kathak flied in the air like a white pigeon of peace.  May peace come to your land soon, someday, Ani la.