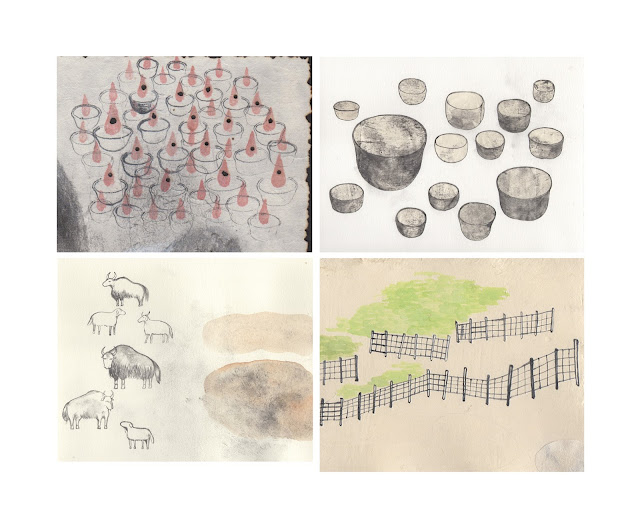 On Monkey Fire Losar, my prayers are with my near and far brothers and sisters who are in prison, in pain, and in suppression for their expression of human dignity.  My wishes are for all living beings to be released from pain and closed dark places to green pasture under the blue sky, where they can feel fresh air and drink pure water.  In another word, freedom. Peaceful wishes on Losar.

In the winter of 2015, I had worked on a short art video piece which is titled 'Eyes Water Fire'.  The first draft will be screened for the first time @NOT SENT LETTERS & GUESTS organised by Jeremy Todd( please see the detailed info below).
Much gratitude to Jeremy for including me in his event, to Jose and Mona for editing the video, and my Tibetan art sister who agreed to perform for me in this event.

@ Dynamo Arts Association,
30 East 6th Avenue, Vancouver
Saturday Night, March 5, 2016
$5-$20 suggested sliding scale donation
(toward event production costs)
No one will be turned away due to lack of funds.
The programme begins at 8pm

"TOMOYO IHAYA (井早、智代), a Vancouver-based artist often working abroad, presents a letter written to a friend living in a politically sensitive place.  The letter can’t be sent without compromising the addressee’s safety and will be read aloud at NSL&G by KUNSANG CHOEKYI.  The first draft of a new animated short will be screened immediately following the reading, dedicated by the artist to everyone caught up in similar circumstances."

NOT SENT LETTERS & GUESTS form public constellations of engaged interdisciplinary practice, unmediated by the realpolitik conditions of contemporary art as a competitive professional sphere. The interrelatedness of art, society and everyday life is critically explored amongst a diverse plurality of artists and publics. Jeremy Todd instigates each event as an extension of his ongoing Not Sent Letters Project, an entanglement with the production of meaning, self and cultural memory, involving image/text epistolary detours online (since 2005), digital shorts, interdisciplinary performance works and cooperatively realized public events.  This is the twentieth NOT SENT LETTERS & GUESTS event.