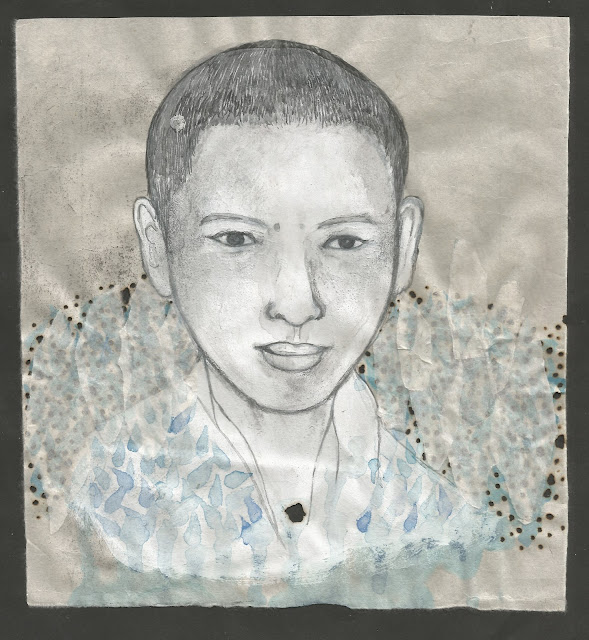 This is a portrait of 25 years old Nun Yeshi Lhakdron who disappeared after her arbitrary detention by Chinese security forces during the 2008 uprising in Tibet.  She was detained with two other fellow nuns and only she has been missing.

It is said the three nuns protested peacefully in Kardze County in 2008 raising slogans such as "Tibetans want human rights" and throwing leaflets that bore slogans calling for long life for Gyalwa Rinpoche (H.H. 14th the Dalai Lama) and freedom in Tibet.

After enquiring about her for a long time, her family members were forced to conclude that she had succumbed to torture during police custody. The news of the conclusion came out on the exile side
on June 30 2016, more than 8 years after her disappearance.  The photo of her came along with the news.

Her face with kind but strong willed eyes and  a shy smile struck me and stayed in my heart.
I printed the photo out and let her gaze at me for a long time.  I could not imagine how she and many other people could possibly gather all the strength to carry out a protest, for which  they must have known brutal violence and torture would await for them.

The portrait that I finally have drawn does not capture the pure-heartedness and strong will that I had felt from her in the photo.  I still post it here to express my deepest admiration for her courage, sorrows for the pain that she experiences, and to remember her life and will.