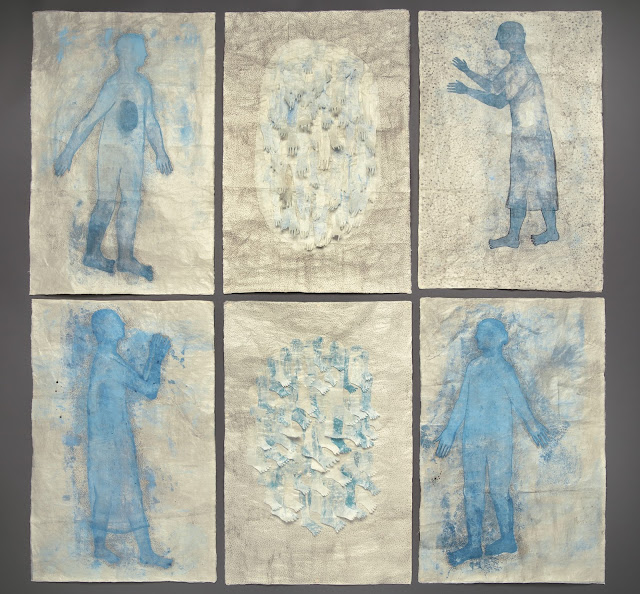 July 13 2017 - After finding out the sad news of Chinese activist and writer Liu Xiaobo's passing, all I could do was to sit still in tears.  In front of my eyes were on the blue drawings that I had been working on that were about something subtle that could not be described in words. They were lit by the morning light.  Out of blue, these figures overlapped with him and his partner, Liu Xia.

I have always kept him, her and their poems in my heart and wished for his release and reunion with his beloved Liu Xia, who had been under a house arrest while he was in prison. I, like many thousands of others, wanted him to live in the peaceful and free world.

Liu's passing brought the sad memory of another inspiring human being, Tenzin Delek Rinpoche's passing on July 12 2015.   Like Liu, he was the one who did everything to serve his Tibetan community spiritually, culturally and socially, which led the authority to arrest him out of fear for his popularity and influence to local Tibetans. He committed no crime and passed away in prison.

May each of us carry on their wills and spirit and never let these kinds of tragedy happen again. I believe that how this world manifests in the future depends on each of us.
Never forget that there so many other nameless shining stars like them who did not give up expressing for the human rights in exchange of their lives.

劉晓波と 劉霞に捧げる絵 ー この絵は なにか言葉にあらわせない 生きるという大海の深いところを不器用に模索しながら製作していたものです。今朝 尊敬する、また無事釈放されて パートナーである劉霞と一緒になれる事を祈っていた民主活動家、教師、詩人である劉晓波さんの訃報がはいってきました。涙がとまらずただ座っていた目の前にこの絵があって 彼らの姿が重なりました。へたで無骨な絵ですけれども この絵は彼らが一緒に 平和で自由な青空のもと また無数の同士と一緒に暮らせるときが来るよう祈りを込めて 彼らに捧げます。また一日違いの、７月１２日は、同じように不当に投獄され２０１５に亡くなったテンジン・デレック・リンポチェの命日でもあります。かれは社会奉仕活動、文化的活動をとうして 地元チベット人に圧倒的な支持をうけていたため 権威の目のかたきにされ 犯していない罪で逮捕され 牢獄でその一生をおえました。
Daybreak Liu Xiaobo
Over the tall ashen wall, between
the sound of vegetables being chopped
daybreak is bound and severed
dissipated by a paralysis of spirit
What is the difference
Between the light and the darkenss
that seems to surface through my eyes'
apertures, from my seat of rust
I can't tell if it 's the glint of chains
in the cell, or the god of nature
behind the wall
The day's dissidence
makes the arrogant
sun stunned to no end
Daybreak a vast emptiness
you in a far place
with nights of love stored away
6/30/1997
from Five Poems for Liu Xia/June Fourth Elegies